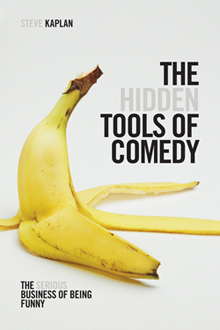 Comedy is the most challenging genre for one simple reason: what is funny to one person is not necessarily funny to another. But that doesn’t make it impossible to write a humorous film or sitcom, because if you understand the foundation of comic situations you can inject humor into whatever it is you’re writing, regardless of genre, especially if you read Steve Kaplan’s The Hidden Tools of Comedy: The Serious Business of Being Funny

. Kaplan is a long-time comedy consultant in the entertainment industry who successfully has distilled his transferable knowledge into what is one of the best comedy books available.

Full disclosure: I’ve attended Kaplan’s excellent Comedy Intensive workshop, which also is well worth the investment if you can spare a weekend, but my only bias is this: I don’t recommend books that suck. I’ve read a lot of screenwriting books and not only are some better than others, but certain books focus on key tenets that will transform your writing, and The Hidden Tools of Comedy

definitely is one of the best screenwriting books available, especially if you want to understand why comedy works and/or how to inject comedy into your scenes.

Indeed, even Breaking Bad creator Vince Gilligan has said he and his writing staff made an effort to inject comedy as much as possible into the very dark and dramatic award-winning television series, and the humor worked because it was based on characters staying true to their given situations, which is among the points Kaplan makes.

Related: More of the best screenwriting books I recommend

is the mistaken expectation that comedy alone stems from a “wouldn’t it be funny if” scenario. No, as Kaplan notes in his book citing multiple examples, comedy stems from characters and situations: “Your characters have to be the master of their own disaster, the cause of everything bad that happens to them, just like they’re the cause of everything good that happens to them.”

Sure, perhaps it would be funny if a certain thing happened at a certain point in your story, but it only has a chance of actually being funny if the “funny idea” stems from situation and character, and Kaplan succinctly demonstrates how you can accomplish “funny.”

Kaplan has taught at UCLA, New York University, Yale, and regularly serves as a consultant and script doctor to Dreamworks, Disney, HBO, Paramount, Touchstone and other production companies. There’s a good reason why he is regularly in demand, and it has everything to do with The Hidden Tools of Comedy

One thought on “Recommended comedy book: “The Hidden Tools of Comedy” by Steve Kaplan”