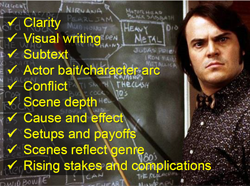 Screenplay “coverage” and “analysis” tend to be used interchangeably, but there’s one key distinction:

Additionally, coverage reports actually are more objective than subjective; therefore it’s important to understand how your writing affects coverage and the steps you can take to get your screenplay recommended to producers.

Note: This two-part blog post is a summary of my August 2013 talk at TheFilmSchool‘s First Tuesday event on script coverage. The checklist is derived from a combination of industry coverage templates and common problems in scripts I’ve covered for production companies.

Script readers are not the gatekeepers

While readers are a key component in the process of filtering material for their employers, they don’t typically prevent good material from reaching those who ultimately decide which films get made. Readers are in the business to identify:

The objectivity of script coverage
Coverage reports focus on the objective aspects of the script, primarily:

Concept: What the story is about.
Plot: The structural beats of the story: inciting incident, act breaks, cause and effect.
Characters: Main character, supporting characters. Are they complex, realistic, in conflict?
Theme: The story’s deeper, subtextual meaning.

Coverage reports are not limited to the above, but these items are the core story elements graded on some numerical or contextual scale, from “Excellent” to “Poor.” The key takeaway here is those all are summarized without opinion, in succinct sentences, so the coverage can be perused based on key story elements alone.

Depending on the coverage report template, there are opportunities for the reader to elaborate in the form of opinion, but the producer is not shielded from the objective summaries of key story elements.

You, the screenwriter, are the gatekeeper
Producers need writers and, in addition to looking for material to produce, they also are looking for writers who can deliver. A “pass” on a script is not always a reflection of the quality of the writing and does not mean the producer is unlikely to work with the writer on other projects.

Writers and story concepts are rated separately
Remember, coverage is for producers, and producers want to know if the concept is “marketable” — the likelihood it will turn a profit if produced, a litmus test regardless of genre and budget.

Regarding concept, “marketable” is relative
Of course, what’s considered marketable is relative. I covered a script that was a small family drama — a genre typically not considered easily marketable — yet it’s going into production in 2014. It may not be as commercially successful as “Ordinary People,” but the script found a producer who was looking for a low-budget drama, and furthermore, it is proof that genre is irrelevant to “marketability;” it’s about finding a producer looking to produce the genre in which you’ve written.

Related: Learn how to market your screenplay at ScreenwritingU.com

A PASS on your script is just about the script
Producers may have their own stories they want written and are looking for the best writer for a particular story, but producers definitely are not going to hire a screenwriter who lacks the skill to write compelling, entertaining scenes. Likewise, readers are not going to recommend writers for the same reason. Having a script that reflects a mastery of the craft is a great calling card for future projects.

So if writers and concepts are rated differently, what can you do as a writer to prove to a producer you deserve to be hired to collaborate throughout the remaining production process?

Your opening scene defines you
The opening pages of your script likely will determine whether or not you, as a writer, will get recommended, because your mastery of the craft is reflected by how you:

Reading the first few pages of a script is like taking the first bite of a sandwich: how many bites do you need to know whether or not you’ll enjoy it?

Next: Part 2: Get the Checklist to RECOMMEND

3 thoughts on “Script coverage: a checklist to RECOMMEND – Part 1”