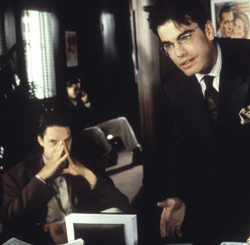 I just got back from the Inktip Pitch Summit, where, for a price, you meet with a variety of producers in five-minute sessions to pitch your screenplay, sitcom, reality TV idea or story concept to as many producers as you like throughout the day. And you’re probably thinking, “no way can I condense my fabulously detailed, intricate story into five minutes!” But the reality is the choice is not yours, because, frankly, producers know within 20 seconds or less if they want to devote the next several years shepherding it through development.

Despite your story’s depth, snappy dialogue, and well-constructed plot with great twists and turns, you have mere seconds to hook producers into wanting to hear more, so develop your pitch accordingly.

Keys to a successful pitch

Start by breaking down your story to these basic elements:

Here are the basic elements of “Casablanca:” 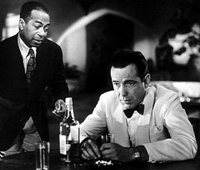 “But, stupid George, you haven’t even mentioned Ilsa!”

Ilsa, of course, is integral to the plot, but her story is intertwined with Laszlo’s; and, frankly, this is Rick’s story, not Ilsa’s, not Laszlo’s. If Ilsa shows up in Casablanca on her own, with no ties to the “Underground,” then it’s quite a different story, isn’t it? “Casablanca” at its core is about getting Rick to fulfill his destiny: to get back into the fight. Remember, this is a WWII film produced in 1942 about a reluctant American consumed with isolation, so “Casablanca” is much more than a love story. 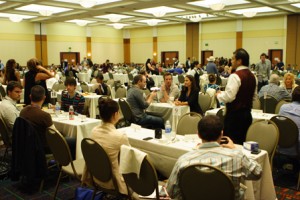 So, given the depth and brilliance of a story like “Casablanca,” why condense any pitch? Because producers, who are confronted with hundreds of story ideas everyday, simply do not have time to hear the whole story. Producers generally care about:

The goal of a pitch is to get the producer to request your script or succinct synopsis or a meeting to hear a more detailed pitch.

So what could a condensed, 20-second pitch for “Casablanca” sound like?

“I’ve got this story about a guy — a real anti-Fascist renegade — who’s so despondent he won’t even help the leader of the Resistance escape from the Nazis.”

“What if the one man who can help the leader of the Resistance escape from the Nazis won’t — because of a woman?”

In either case, one sentence yields action, romance, intrigue about a main character in multiple levels of conflict (intra-, inter- and extra-personal), and we’re left wondering who this guy is and how will the story unfold.

In other words, we want to know more!

The goal of your pitch is to get producers to want to know more.

Regardless, if you are pitching “Casablanca” to a producer who has no interest in World War II period pieces, you’re out of luck — but only with such producers who have no interest in World War II period pieces. Producers infamously have passed on great screenplays such as “Star Wars,” “Raiders of the Lost Ark,” “The Shawshank Redemption,” and the “Twilight” trilogy, to name a few. The key is to refine your story to its core essence and find producers who have produced stories in a similar vein. The Internet Movie Database — www.imdb.com — is a great place to start. Likewise, consider attending a pitch fest. At InkTip Pitch Summit, producers were grouped by genre, so, in my case, for the sitcoms I wanted to pitch, I identified the producers who were accepting sitcom pitches. For my feature comedies, I pitched to producers who were looking for mid- to high-budget broad comedies.

If you aren’t ready for a full-on pitch fest, check if film festivals in your city have a pitch contest; even if you aren’t ready to enter, it’s fun to attend and hear other writers pitch to producers — all of whom are actively seeking material even if they say otherwise.

ScreenwritingU conducts a variety of online workshops that focus not only on marketing your screenplay but also developing marketable material.

My Alma mater, TheFilmSchool, hosts semi-annual pitch nights in Seattle. If you live elsewhere, see if there are similar events or meet-ups, because, at the end of the day, pitching is a skill you need to master if you intend to generate interest in what you write.

5 thoughts on “Sell your screenplay: what producers want to hear”