As a former newspaper reporter, I was happy to see “The Post” fast-tracked to production and wide release. Director Steven Spielberg has said the urgency was a direct reaction to the Trump presidency, but, from a screenwriting and journalistic perspective, the film resonates beyond cinematic confines. It speaks to the core problems plaguing the media today, and reminds us why democracy is at risk.

“The Post” centers on the decision by Washington Post publisher Katharine Graham (Meryl Streep) and editor-in-chief Ben Bradlee (Tom Hanks) to publish the Pentagon Papers, which at the time were classified as top secret, and revealed military analysis the Vietnam War could not be won. This was in direct contradiction with assurances to the contrary by top government officials, particularly Defense Secretary Robert McNamara (well portrayed in the film by Bruce Greenwood).

The New York Times initially disclosed the Pentagon Papers’ content, but the Nixon administration filed suit, and within days the Times was forced to cease publishing until the matter could be settled in court. The Post, then striving to gain nationwide respect and shed its “local” paper status, subsequently jumped in to publish what the Times couldn’t, and soon after other newspapers followed.

“The Post” originally was a story primarily focused on Graham’s character, as she navigated the male-dominated world of journalism, banking, and politics. It could have been a much different film, taking on the procedural “get after the story” perspective of “All the President’s Men,” and, more recently, “Spotlight.” Jon Schwarz writes in The Intercept the film is about journalism versus capitalism.

But original screenwriter Liz Hannah, later joined for a polish by Josh Singer, said the relationship between Bradlee and Graham was key to the story she crafted.

Relationships, of course, are key to what makes any story interesting, but “The Post” has much more to offer. It reminds us of the importance of the freedom of the press, and its critical role in today’s fragile democracy.

Leaders lie and must be held accountable

The opening sequence of “The Post” highlights the big lie about Vietnam, setting the story in motion.

The most damaging lie in recent years certainly has been the lie Iraq had weapons of mass destruction, resulting in hundreds of thousands of deaths and trillions of dollars wasted on an unjust war, as the U.S. infrastructure continues to crumble, and key societal needs — social services, education — remain woefully underfunded.

Trusted institutions can fail us

“The Post” reminds us of the importance of a news media free — and committed — to expose lies that undermine our common wealth. When The New York Times and Washington Post are forced to apologize for their shocking complicity in repeatedly reporting the WMD falsehood, the state of American journalism is in crisis. And its resolve will be further tested in this new era of celebrity presidency, especially with a serial liar-in-chief in the White House.

Most frauds are exposed by whistleblowers, and without them we would not be aware of the abuse of power that undermines our well being, personal freedom, fiscal policy, and anything else you’d care to add to the list that affects not only our daily lives, but future generations. 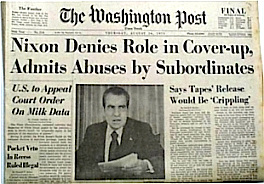 Leon Neyfakh’s “Slow Burn” podcast about Watergate rings all too familiar in this time of investigations of Russian collusion with Trump campaign officials during the 2016 election.

Scandals, of course, are not specific to politics, but without tenacious checks and balances, political scandals undermine what’s best for the common good. And in recent decades, the corporate-dominated news media has failed miserably.

Another relationship highlighted in “The Post” is that between Graham and McNamara. It speaks to a problem with today’s incestuous environment of journalists hobnobbing with the officials they cover.

To quote a a fellow journalist, Mike Hyer, who, when we were working together at our college newspaper, the Indiana Daily Student, said, “We’re not here to make friends. We’re here to get the facts.”

The worsening war on journalism

Reporters sans Frontieres, an international organization that tracks atrocities against journalists and the freedom of the press, paints a dark picture in its 2017 World Press Freedom Index, reflecting a world in which “attacks on the media have become commonplace and strongmen are on the rise. We have reached the age of post-truth, propaganda, and suppression of freedoms.”

The media has a responsibility to inform

Today’s era of “he said, she said” reporting does not serve the public interest; a debate devoid of facts only serves to confuse. This most famously was demonstrated by the tobacco companies, who used disinformation to lie about cancer risks. Today, the same nefarious deceitful tactics are used to undermine the factual basis humans are directly causing global warming.

In the broadcast realm, the Federal Communications Commission once had the Fairness Doctrine, which mandated “honest, equitable, and balanced” presentation of controversial issues of public importance. Television and radio stations that violated the doctrine supposedly were at risk of losing their broadcast license. Today, controversial topics, such as climate change, rarely even make the evening news.

“The Post” seems to embrace an era of truth-telling that since has eluded us. In an era of ever-increasing fake news, the film reminds us that democracy is always what is at stake.