There’s no greater sense of accomplishment than, after months or perhaps even years of toiling over your script, you get to type those magical words: “FADE OUT.” Your characters have said what they have to say. Your plot has reached its inevitable conclusion. Your story has reached its end.

[Insert maniacal laugh here.] Sadly, more work is needed — but you don’t know that because you’ve yet to hear your words spoken by actors. Among the problems you’ve yet to discover:

But it’s okay; it happens to all writers, and it can be fixed. 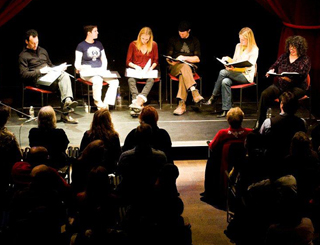 For a “finished” script, the best thing to do is hear what you’ve written read aloud by actors. Final Draft, for example, has a feature that allows you to listen to male and female voices read through your script, but the software can’t provide the valued feedback an actor can, such as, “I don’t understand why my character would react this way.”

In short: there’s no substitute for the real thing.

Tips for a successful and insightful script read-through:

A read-through typically is a private event — exclusive to the writers and actors — but a public reading can add the audience perspective, which can be unnerving, so prepare yourself. TheFilmSchool in Seattle holds public readings several times a year in a theatre, which is as entertaining as attending a play or watching a film.

The important thing to remember is writing is a process that requires a lot of rewriting, and the read-through will help you improve the way you communicate your story to the audience.

See also: Producing a public staged reading of your screenplay