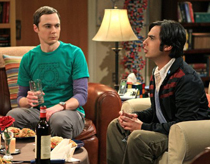 All television shows, regardless of genre or “on location” shooting, have scenes in every episode set in a handful of primary locations:

And these primary locations will be the core of your sitcom, and will contribute to each episode on a thematic level, too, revealing layers of character traits. For example, in “The Big Bang Theory,” Penny’s apartment is typically messy, reflecting her somewhat disheveled character, while Leonard and Sheldon’s apartment is always neat, reflecting Sheldon’s obsessive-compulsive nature.

(Note: This is part of a series of posts about my sitcom development process in preparation for a free staged script reading Aug. 1.)

So what is it about your story’s settings that will reveal something about your characters?