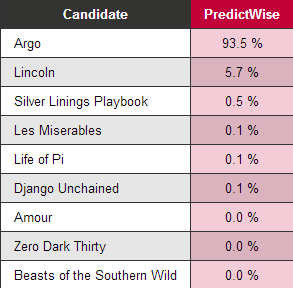 Take a look at all of Rothschild’s Oscar predictions at his PredictWise blog, and for some insight regarding his approach, check out the Microsoft Research “And the Oscar goes to….” blog post.

I have no predictions to make, but I’ve always been partial to the technical categories like cinematography, screenwriting, and especially editing, which for me is the third and final phase of screenwriting; the first phase is the actual writing of the script, but then the actors and director do a bit of rewriting during production, and then, finally, in the editing room, a skilled editor can enhance a story even further.

There’s a great Deadline.com interview with all of the Oscar-nominated editors that I highly recommend: “OSCARS: Nominated Film Editors Break Down Key Scenes.”

This is my favorite time of year for films because, not only are the best films in theaters or already available to buy or rent, but the cable channels are featuring Oscar-winning films from previous years, so happy viewing, everyone.

Do NOT follow this link or you will be banned from the site!