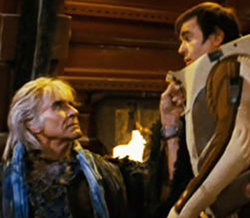 Star Trek II: The Wrath of Khan” is widely revered for many good reasons — among them Ricardo Montalban’s memorable performance as well as a certain plot twist at the end — but in this post I’ll focus on the genius of the film’s second sequence and what screenwriters can learn from the well-executed screenplay by Jack B. Sowards. What makes a sequence filled with exposition set primarily in a confined space so dramatic and compelling?

Focus on the sequence structure
First, what is the goal of the sequence? To meet the antagonist, Khan, and, as with all sequences, to propel the story forward. But what of the challenge of revealing key information in a lengthy scene that plays out in a confined space?

Start with what the audience knows
In the first sequence and the beginning of the second sequence we learn:

Plot, character, theme are introduced. And while we have not yet met Khan, aging is thematically introduced first through Kirk, then later reinforced by Khan, and again later by David and Carol Marcus. Theme is seamlessly woven throughout the cast.

What the audience needs to know
The second sequence also provides backstory essential to the audience’s perspective — especially for those who may not have seen the television episode that first introduced Khan. Why should we care about Khan? How dangerous is he? Why is he to be feared — what makes him a superior foe? What is Khan’s motivation for the actions he’ll take? A well-motivated superior antagonist is at the heart of the best stories.

Sustaining drama with mystery in a confined space
The sequence unfolds innocently enough. Chekov and Captain Terrell beam down to a seemingly lifeless planet, reinforced visually:

And the sequence unfolds: 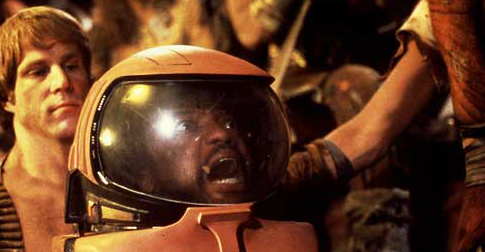 So the 10-page sequence — set in a confined space — dramatically introduces the bad guy, reveals key backstory, jeopardizes the safety of the top-secret Genesis project, and introduces the Khan-Kirk conflict in a way that suggests Kirk will face a tough challenge when he and Khan next meet.

Trust the actors to deliver your intentions

Of particular interest is the subtle action Montalban injects into the scene amidst his chunks of dialogue — a reminder to trust what experienced actors can bring to the table.

Note the absence of parentheticals and other attempts to “direct” the characters’ emotions. If you’ve successfully placed your contrasting characters in a dramatic situation, the scene’s inherent emotion will surface.

Apply beats to dialogue as well as story

Of course, such lengthy dialogue should be avoided, but Khan’s exposition here is nonetheless instructional because you can feel the emotional shifts in the beats of his dialogue — each phrase is revealing, emphatic, rhythmically delivered with conviction, melodically escalating the tension. As the scene unfolds it is increasingly obvious not only that Chekov and Terrell have no escape, but also that Khan is not exactly Mister Nice Guy.

Note that lengthy block of dialogue in this case doesn’t include Khan’s actions, such as when he jabs at the creature on the “including my beloved wife” comment. If your bad guy speech is lengthy, consider injecting some relevant, specific action that could break up the text without derailing the scene’s momentum.

The sequence ends with a great cliffhanger that seamlessly flows into the following sequence, starting with Kirk aboard a shuttle to inspect the Enterprise — happily oblivious to Khan’s wrath yet to follow.

to be a particularly useful reference regarding scene structure and subplot integration and a must-read if you are new to screenwriting.