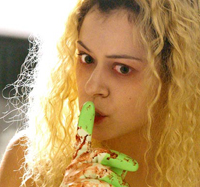 You already may have heard the outcry over the BBC America hit show, Orphan Black, not receiving any Emmy nominations, and I concur; Orphan Black has great writing, is well cast and very well acted, and has a high production value — all of which equate to compelling episodes week after week. So why no Emmy noms? Who knows, but my reason for taking to the soapbox in support can be condensed into one scene from this past season’s finale: the dancing clones.

If you’re unfamiliar with Orphan Black, the very talented Tatiana Maslany portrays an edgy, seemingly untrustworthy misfit who discovers she’s a clone, assumes the identity of another clone, and then discovers she’s only one of multiple clones, and part of some kind of conspiracy. But, more impressively, Maslany portrays all of the clones — and many times in the same scene. Beyond the special effects, It’s a phenomenal display of the acting craft, especially for a seemingly “inexperienced” actor. Regardless of which clone is in a given scene, Maslany is in total command.

Clones can dance if they want to

Which brings me to the infamous “clone dance party.” Maslany is in such command of each persona that, rather impressively, each clone dances to her own beat.  Keep in mind this scene was shot multiple times to capture each of the four clones Maslany portrays:[youtube]XE2u_N8g6cs[/youtube]

Maslany, of course, has a great supporting cast of talented actors, and the co-creators and primary writers, John Fawcett and Graeme Manson, are equally deserving of recognition for crafting and maintaining such a compelling series through its first two seasons.

Expectations are high for season 3, of course, but one thing is guaranteed: we will be entertained.