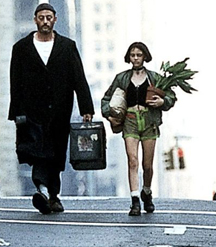 How to care about an assassin
Consider the lead roles of “The Professional” and “The American” — both assassins — and how they’re introduced. While both are introduced in a way that highlights their skills as assassins, their character traits are quite contrasting:

So, sure, maybe Clooney’s Jack, as a man with a hidden identity, had to make the necessary-yet-worst of possible choices, but in the opening moments of a film such a choice is not going to generate much sympathy for the guy. Reno’s Leon, however, risks exposing his identity to save Matilda.

Blake Snyder’s aptly titled “Save the Cat” highlights the importance of generating sympathy for your main character, and it’s also one of the better books on quickly developing an industry-friendly structure of your screenplay that will help guide your writing.

In addition to providing the audience with a reason to care about your main character, it’s also important to introduce your character in an action that reveals his or her key character traits.

Likeable Bad Guys
In “Butch Cassidy and the Sundance Kid,” we first are introduced to Butch as he discreetly studies the security features of a bank. Clearly, the man is cautious, a planner, a smart man driven more by reason than emotion. So without even saying anything, we know something about him.

Likewise, when we first are introduced to Sundance, he’s winning at cards, and doesn’t take too kindly to being accused of cheating — especially since he wasn’t cheating. Instead, in a classic example of subtext, he demands an apology from a man he could have easily killed in a gunfight.

So even though we know from history that Butch and Sundance are outlaws, William Goldman’s script — in the opening sequence — reveals likeable character traits of the two criminals and gives the audience some reason to invest in their journey. It’s a great script to study for other reasons, too, especially mastering when to reveal important facts about your characters.