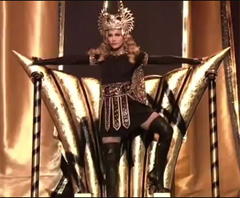 Your main character needs a memorable entrance
Your setup of your main character’s “ordinary world” need not be ordinary, or, rather, boring, nor must it be grand, as Madonna’s was, but it must be memorable. Think of the numerous ways Madonna could have entered the stadium; her choice of a grand entrance was not only memorable but it also set the tone for what we could expect from the rest of her Super Bowl halftime show.

Choose carefully and get in and get out quickly
Because Madonna’s show had to fit within a strict time limit, her medley not only had to be carefully selected, but also carefully ordered, and long enough to communicate the essence of each song but short enough to allow for enough songs to represent her musical catalogue. If you think of your story as the “musical catalogue” of your main character, what is necessary to represent who your character is and in what scenes will you place your character that not only are revealing but also advance the plot?

Be creative with your transitions
Madonna’s Super Bowl halftime show incorporated both musical and visual transitions between songs that immediately shifted the tone of her show, and as screenwriters the transitions in our screenplays must be as sound. Barb Doyan’s Extreme Screenwriting newsletter often refers to the importance of transitions between scenes, and she gives great examples of how well-crafted transitions can elevate the visual impact of what you’re writing.

Build to and deliver a grand finale
Once Madonna launched into “Like A Prayer,” there was no doubt the grand finale was underway, leaving the audience to wonder just how, after such a memorable entrance, would Madonna end the spectacle. And, of course, the show ended in memorable spectacular fashion.

So whether you’re making a short for YouTube or writing a screenplay, keep one thing in mind: your job is to be as entertaining as possible. Those are the shorts and scripts that win competitions and lead to managers, agents and sales.