Screenwriters are always told to write visually because film is a visual medium, and “SMASH CUT TO” somehow has emerged as a “technique” to convey a sudden cut to a new scene. As Benedict Cumberbatch’s Sherlock would say — actually, he would rightfully dismiss you with, perhaps, a glare, if even that, and move on to higher intellectual ground, where you should be, because SMASH CUT TO, if anything, actually will get in the way of the dramatic transition effect for which you poorly are attempting to compensate. The key to a dramatically effective transition from one scene to the next stems not from terminology, but instead from a well-crafted setup.

Your goal is to write an entertaining screenplay
Julie Gray’s aptly named “Just Effing Entertain Me” blog sums it up best: readers and producers want “page turners” — scripts that are so entertaining they can’t and don’t want to put down. But I digress.

No such thing as a SMASH CUT
To get purely technical, a CUT is just what it is: an abrupt shift from one image to the next. No SMASH needed. Got it? If you want to emphasize a sudden transition between scenes, set it up through character, action and dialogue, which will elevate your writing to ethereal heights as well as convey to the audience — readers, producers, directors, editors — that, yes, an abrupt CUT is warranted.

SMASH CUT TO does not compensate for inadequate transitions
Industry veteran Barb Doyon often provides excellent examples of professional-quality transitions in her monthly Extreme Screenwriting newsletter. Screenwriter John August, who co-hosts the insightful Scriptnotes podcast with Craig Mazin, has a good example on his blog of PRE-LAP transitions, a creative technique that ties scenes together by sound.

Transitions add unneeded length to your screenplay
Annoying SMASH CUT TOs aside, using technical transition terminology of any kind adds several pages to your page count. Do the math: 40 to 60 transitions, double spaced, between the end of one scene and the following slug? You’re writing a spec script, so why make it longer than it needs to be? Leave the editing terminology and transitions to the shooting draft; the director and editor are the ones who decide whether CUTs or DISSOLVEs apply. Anyway, it’s obvious when one scene ends and another begins. So… 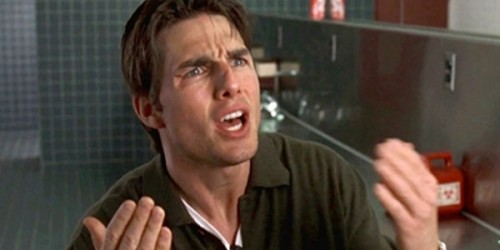