So there’s this cool monthly event in Seattle called “Science on Tap” where you gather in a pub with other nerds to hear lectures on matters scientific and eat and drink and talk about science. You probably wouldn’t expect a lecture entitled “Beyond the Hype: The Weird World of String Theory” to be crowded — too crowded even for an entangled particle — but it was. Or, then again, maybe it only appeared to have been crowded.

Regardless, this is all about research and understanding the “world” of your story. In my case, one of my stories involves a dysfunctional group of time travelers, so a lecture focusing on the weird world of string theory had particular relevance to my story.

Which leads me to theme. In a well-constructed screenplay, theme is reflected not only in plot and characters, but also in the “world” of the story.

Consider “Casablanca.” What is the theme? Isolation? Rick has run off to Casablanca — to escape the Nazis, sure — but also to escape from himself, to wallow in his isolation in a place that — are you ready? — exemplifies isolation! Remember the opening moments? The narrator tells us people make the arduously lengthy journey to reach Casablanca despite their limited chances of even leaving? The people “wait…. and wait… and wait…,” and the opening camera shot famously descends into Casablanca as if dropping us into the confines of a prison. 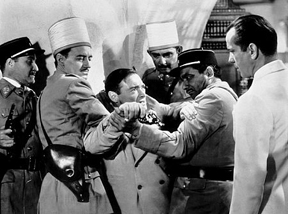 And what of Rick? When we first meet him, he’s alone, playing chess with himself and not wanting to join any customers for a drink.

And remember this famous line: “I stick my neck out for nobody.”

So it isn’t enough for Rick to be emotionally isolated. He must be in an isolated place, and everything about that place must exemplify isolation. Thematically, the opening moments of “Casablanca” wonderfully establish the film’s theme physically and emotionally.

Of course it’s a love story, but, among other things, Rick has isolated himself from love, too, has he not? 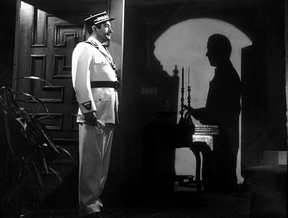 Additionally, throughout the film everyone is concerned about finding the missing Letters of Transit that for the lucky holder will guarantee freedom from Casablanca’s desperate isolation. Even in the dialogue the characters talk of escaping from the isolation of Casablanca. See how isolation as a theme permeates the entire story?

By the end, of course, Rick clearly has come to learn that isolation is not what he needed, and the closing shot beautifully mirrors this thematic exclamation mark as he and Renault walk into the fog — a fog without walls or constraints. The entire story until this point primarily has been shot indoors, in confined places. But here at the end they’re at the airport — about a wide open space as you can get.

OKAY, so what’s that got to do with string theory and such? Well, my story’s theme per se will not be “string theory,” but until I can learn a thing or two about it I won’t be able to write a thematically deep screenplay, that’s what. Unless string theory is relevant to the story’s theme, it really has no place, and any mention of it risks distracting audiences from the thematic point I, as an artiste extraordinaire, am trying to make. Otherwise why bother? So my task, therefore, is to either find a thematic relationship between string theory and my dysfunctional time-traveling troupe, or to discard it in favor of something wholly relevant to my story.